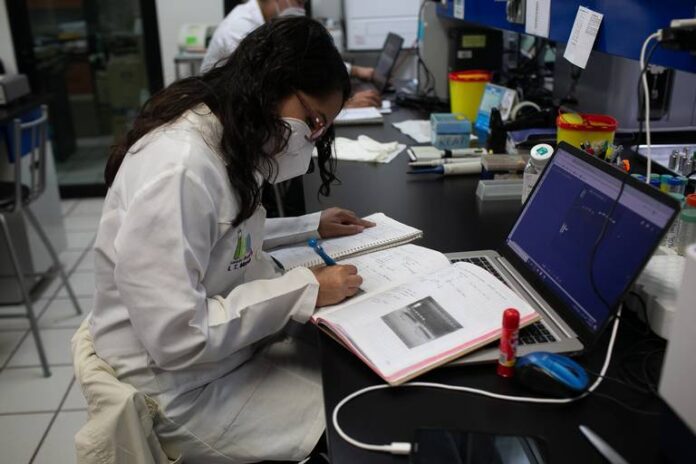 Morelia, Michoacan (Feb. 19, 2021).- At the end of this year, a Mexican vaccine against Covid-19 will be in a position to be tested in people: researchers from the Universidad Michoacana have developed a mosaic prototype that has already passed to phase two.

It is a mosaic-type vaccine, made up of 16 protein fragments of the virus, the second of these characteristics in the world.

Alejandro Bravo Patiño, professor, researcher, and head of the Multidisciplinary Center for Studies in Biotechnology of the Michoacan University of San Nicolás de Hidalgo (MSNH) is the one who heads this project.

The expert reported that they have just passed from the first to the second stage of testing for the development of the vaccine.

“This means that we have already selected the 16 different protein fragments of the SARS-CoV-2 virus that we are going to use to immunize and induce a response from the immune system of people,” he explained.

The scientist indicated that the team of researchers is now at the stage where they analyze the response of laboratory animals to the compounds they have been injected with.

The researcher explained that the prototype they are working on is a mosaic vaccine, which is known that way because it is made up of 16 different protein fragments (peptides) that they have identified through an exhaustive analysis of the SARS-CoV-2 genome.

He specified that the genetic material of the coronavirus encodes proteins that make the viral particle and from there 16 fragments were identified that can induce a very favorable immune response.

He stressed that this vaccine has characteristics to achieve two objectives: the first, he emphasized, is that long-term neutralizing antibodies (Iggs) are generated, for which they also need to produce memory B lymphocytes (cells), which are the ones that produce antibodies.

“And on the other hand – which is the most effective in vaccines designed against viruses – the production of activated T lymphocytes or CD8 lymphocytes”, explained the researcher. In addition, he explained that the function of T lymphocytes is to identify in which cells of the patient’s body the virus replicates and destroys them; that is, “it prevents more copies of the virus from being made within the person who has been infected.”

Bravo Patiño said that the difference between this vaccine and those already on the market is that the one they develop uses 16 different peptides.

“And, if a mutation occurs in any of them and falls within one of the peptides that we select for the SARS-CoV-2 vaccine, we are not going to change the entire vaccine; we are just going to change a small fragment of one of the peptides so that it continues to respond favorably in the person who is immunized and who recognizes the new variant of the virus ”, he explained.

The researcher stated that this type of vaccine against the coronavirus is only prepared by a laboratory in the United States and, in this case, also by the Universidad Michoacana.

This, he specified, despite the fact that the National Council of Science and Technology (Conacyt) denied them economic support for this research project, they will continue to work on this new vaccine with their own resources.

He clarified that the total investment for the development of this vaccine has been fully absorbed by the Universidad Michoacana.

In that same laboratory, graduate students and senior researchers, also headed by Alejandro Bravo Patiño, are working on a couple of rapid tests to detect the virus in a maximum of 45 minutes and at a very low cost.

The scientist explained that the tests work with biosensors that detect the virus in a period of no more than 45 minutes, as well as antibodies and antigens of SARS-CoV-2.

Both tests are already in the approval stage at the State Health Laboratory and at the IMSS clinics in Michoacán, where, no later than three months, they will already be applied.