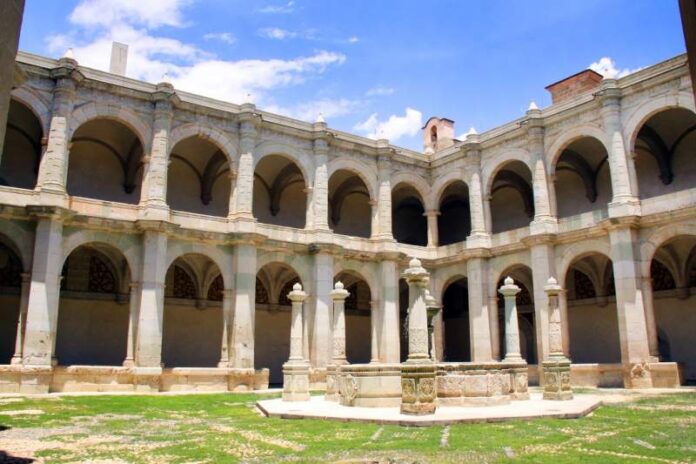 Some beautiful buildings in the city of Oaxaca de Juárez are so imposing that they mark the appearance of this capital, making it a unique city that accentuates its world fame.

Some enterprising women come to have great success in their projects, thanks to their great dedication at work, their discipline and the motivation of their family, this is the case of a brilliant Oaxacan: Guadalupe Ruíz López, who founded the transportadora y tour operator: Walker, Travel & Tour, benefiting 32 families directly and more than 60 indirectly. If we talk about Tours in the city and anywhere in the State, an excellent option is: Andador, Travel & Tours, later we will tell you more about this 100% Oaxacan company.

In a great city like Oaxaca de Juárez, we feel proud for many reasons, one of them is its emblematic buildings and places, which give Oaxaca that unique appearance and with that beauty position it as one of the tourist places that everyone wants. to visit.

This is how, if we take a walk through the city itself, we will find true architectural beauties, such as the famous “Macedonio Alcalá” Theater, which is an artistic venue located in the historic center, on the streets of Av. Independencia (No.900) and 5 de Mayo, it was built in 1909, in art nouveau style, being considered one of the most important theaters in the country. It is an example of modernist architecture with French influences, characteristic of the Porfiriato. Its name is in honor of the Mexican musician and composer of the XIX century, author of the waltz “Dios never dies”.

The building of the Faculty of Medicine of the Autonomous University “Benito Juárez” of Oaxaca. It was the hacienda of Aguilera, a sumptuous mansion in which the six monolithic columns of polished granite stand out from the main facing, with a composite capital and a classic triangular pediment, in whose tympanum an equine medallion was placed in the center and on its sides, human figures with tools in an allegory of art, industry and the field. A fountain surrounded by a small garden stands out from the front. This construction was completed in 1913. It is located on Calzada San Felipe del Agua, in the former farm of Aguilera.

The Fountain of the 8 Regions was built and inaugurated in 1957. It was a proposal by Arch. Octavio Flores Aguillón, who was Director of Public Works, to represent ethnic origins and to welcome all visitors. The proposal was approved and the fountain was installed first at the exit to Mexico. During the period of Governor Rodolfo Brena Torres from 1962 to 1968, the UABJO School of Medicine was built, making the decision that to decorate the esplanade of this educational institution, the Fountain of the 8 Regions would be moved here, which at that time It was still known as the source of the 7 regions, which became the top of the Calzada “Porfirio Díaz”. Its design stands out for the female sculptures approximately two meters high, made in bronze by the artist Carmen Antúnez, having at the center the character of Valles Centrales a Danzante de la Pluma; In 2006, upon recognizing that there are two Sierras, the North and the South, the Source became the Source of the 8 Regions.

The Oaxaca Cathedral was built in 1535, adorning the heart of the historic center, this temple being consecrated on July 12, 1733, dedicated to Our Lady of the Assumption. Because it is in front of the Alameda, it is an ideal setting for performing cultural music concerts, which in times prior to the pandemic, were used to perform with the participation of various groups of musicians, of different genres and styles of music. On the side of this cathedral in the month of December, stalls of delicious donuts are installed, having a great atmosphere in this place.

And just like these places that we mentioned earlier, there are many more that make our Capital a great city that, first of all, we Oaxacans are proud of it, but which also positions it as one of the best tourist places in Mexico and preferably international tourism.

What a pleasure to be able to know stories of people who with work, discipline, effort and dedication achieve their goals and make their lives transcend. This is how Guadalupe Ruíz López from Oaxaca, for the love of Oaxaca, designed a project to show the emblematic places of our beautiful Oaxaca And this is the recognition for this entrepreneur, who with passion and perseverance made her project come true, now having a company with which, in addition to promoting the culture and tourism of Oaxaca, also generates resources for other 32 families that depend on her project, directly and more than 60 families indirectly, in the tourism industry in our entity.

But let’s learn more about our character: Guadalupe is the daughter of Mr. Josué Samuel Ruíz and Mrs. Guadalupe López, she was born in the Isthmus of Tehuantepec Region, in the municipality of Chahuites, but lives in the City of Oaxaca de Juárez. He tells us that to talk about success, we must talk about discipline that in his criteria is what leads you to achieve the objectives and goals, considering that patience is the essential element, since achievements take time and there are no impossible if you work with great passion to achieve them.

But in addition to the procedures and techniques to achieve them, in her personal experience, it was putting herself in God’s hands that led her to achieve her goals, she was always very clear about her mission and vision where her values ​​that she acquired in her family cradle, They have given him a personality that inspires respect and trust, since at all times he applies the values ​​that were instilled in him and that are part of his life; In addition to his great passion for work, in his case it was what led him to create and maintain his transporter and tour operator called “Andador” Travel & Tours, at all times he is very aware of making the best decisions, granting loyalty with closed eyes to those who give their support and trust, not prejudging anyone and evaluating the proposals for the development of their project,

Lupita’s motivation is her family, made up of three children, who give her the joy that drives her to move forward in difficult times, and she learned that always holding the hand of God, we will move forward and adds that: “… They say that love, nobody dies, but when you have it, it’s wonderful … “

Another great inspiration for Lupita is her great love for Oaxaca, since this love is immense, it is her inspiration and at the same time she commits her to promote it in the best way every day through her project.

Lupita tells us to be totally grateful to those who have helped her achieve her goals, she also thanks those who have taught her that humility and solidarity should be part of our life and above all always supported by the family.

Lupita recommends that we proudly show what Oaxaca has, as it is: its culture, gastronomy, textiles, dances, sites, temples, forests, magical towns, mezcals, handicrafts, among many other things, having beautiful emblematic places in the capital of the State such as the ones we comment on here in this report and where your company can provide you with this service through its carrier and tour operator: “Andador” Travel & Tour, with telephone number: 9512059986 and social networks: Facebook: El Andador on Instagram: @elandador twitter: @viajeselandador and its website: www.elandador.com.mx

We hope you take a walk through Oaxaca and feel that great flavor of the province that Oaxaca preserves and that you carry it in your heart.