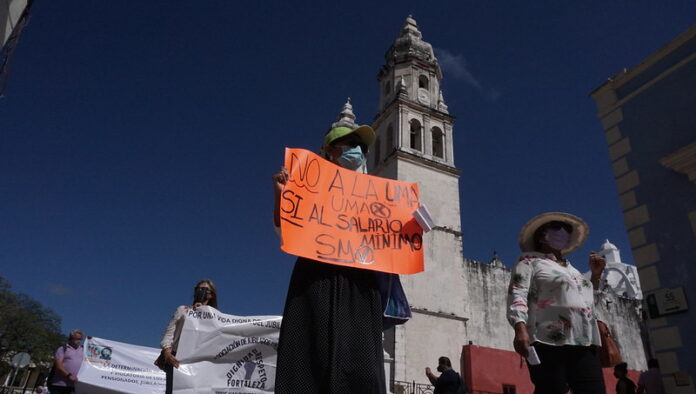 ‘We are not asking for something impossible and we do not want to be used electorally’: Hermelinda Domínguez

Considering it necessary and urgent action to pressure the Congress of the Union and Senators, Retirees and Pensioners of various associations in Campeche, they marched through the streets of the Historic Center and later made a similar caravan through the same area but extended it to the city’s boardwalk and other areas.

“We make noise so that they listen to us, we do not ask for something impossible and we do not want them to use us electorally,” said Hermelinda Domínguez Velázquez, president of the Elpidio Domínguez association, and who has sought to have their proposals and requests taken into account, but not they have had results, much less the support of the authorities.

He recalled that just a couple of days ago they held a demonstration in the Main Park of the Historic Center, that they attended the Palace of legislative sessions of the State Congress and some deputies signed their petition and gave their word to lead exhortations in the legislative platform so that The claims reach the federal deputies and senators, but they have tried to dialogue with the federal deputies of Campeche and have had no response.

“The only thing we ask is that the previous scheme return, our pensions were squared at minimum wages and of course, the annual increases benefited us because there were retroactive, now that they modified the law, that they placed the UMA, there are no retroactive and the pension does not increase and every month or year our health worsens and what corresponds to us is not enough for medical studies or medicines, “he said