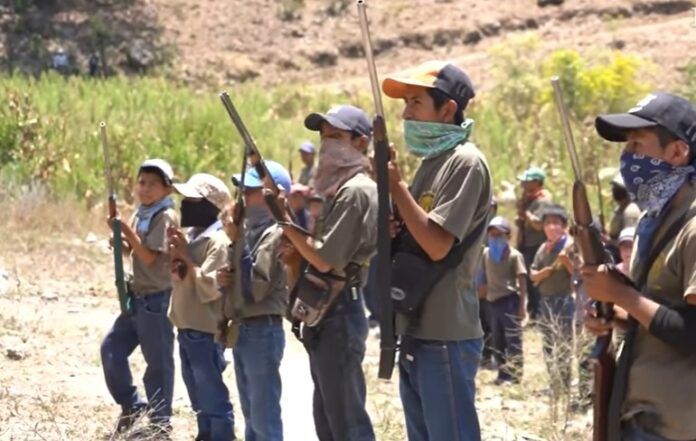 The indigenous community of Ayahualtempa, Guerrero, José Joaquín de Herrera, increasingly isolated and poor, puts infants on parade in a new test of strength and a desperate cry for help.

Under a zenith sun, the armed children parade one after another throwing alive the orphans, the widows, the native peoples, General Zapata. “Live! live! live!”. For the third consecutive year, minors have joined the adults of the community police in a kind of military parade that is a call for help to the Government of Mexico and also a show of force before the organized crime groups that besiege them in the Lower Mountain of the State of Guerrero. They are now just an irreducible village of 600 inhabitants in an area where poppy cultivation has been gaining ground by gunfire. The Ardillos, a group of criminals, want the land and semi-slave labor for the opium gum. Who does not fold pays it dearly? And in the municipality of José Joaquín de Herrera, they do not want to fold.

Last year, the strategy of arming the children, even with toy shotguns for the seven to 12-year-olds, paid off. The Government of Andrés Manuel López Obrador was forced to react to the international alarm. Armed children in Mexico. This year, the community police have forced the pulse a little more: the kids have fired into the air in an open field in the Sierra de Guerrero after launching slogans and demanding that the Government “support the widows, orphans and displaced people. Enough of crime and discrimination against the indigenous peoples of Mexico ”. The shots also looked like toys, but they weren’t.

The so-called self-defense groups have a long tradition in Guerrero and have spread throughout the country. Ordinary people arm themselves to protect themselves from the dangers that threaten them. After all, the Constitution establishes autonomy for indigenous peoples in matters of justice and police, among others. And they exercise it, not always very wisely. The siege of organized crime has turned these local patrols into defense forces that every year lose lives in their shootings with the drug traffickers. On both sides, they are lost. In 2020 there were six attacks, according to the accounts of Bernardino Sánchez Luna, 48, a veteran guerrilla who organizes these militias in the area.

The armed defense of these communities was born with a community security objective, but, at the same time, it became a quasi-military group to which they now add children to train them. Why involve children? Why raise them with a shotgun in their hands? “The Government has not complied with us. We asked the government for help against the organized crime groups and they do not respond. We asked them for secondary school teachers, because we cannot leave town, and they have not arrived. Our task is to cultivate the field, if the government does not want us to arm ourselves, to give us security ”, says Bernardino, as they all call him. Yeah, but the children? “The Government has not complied with us.” There is the pulse. The rest is bravado so the Ardillos know who they are playing it with.

The line of little black-haired and dark-skinned soldiers parade through town. They wear peaked caps and stiff leather huaraches. With a bandana tied to the neck they cover their nose and mouth, as if they were minimal guerrillas. Little flesh and blood figures that smile with all their teeth at the package of cookies. The dust of the dirt roads covers everything and the sun does not give its arm to twist. They carry wooden weapons, toy guns; the smallest hold sticks. And they throw cheers behind the public address vehicle. It almost seems like a holiday. The procession has been led by women, who have little voice in these towns. Then come the kids, then the adults. Their shotguns also reveal years of struggle: the worn handles, the dull barrel, homemade straps. More than a show of force, it looks like an army returning home after years of battle. Defeated.

The journalists have arrived in a car caravan. They are thus protected from dangerous roads with checkpoints of all kinds of uniformed men. They are welcome to a place where nobody enters because the hosts want to send a message “to the world”. “We are not criminals,” the children tell the Government at the microphone under the sports hall with the basketball hoops. But the simplified discourse that in Mexico turns everything that leaves dead into a drug does not allow a very complex reality to be distinguished at first glance. In many parts of the Republic, citizens now wear self-defense shirts without it being fully known who they are or what they defend. In this municipality there is only one certainty: they are poor and they don’t want violence, but generation after generation they go through arms. Sitting at the edge of the court, three women seem oblivious to the matter. The oldest speaks Nahuatl, like everyone else, and pretends not to understand. The youngest, 27, does not want her children to carry rifles. “It will be what God wants. I would not like my children … but if the people chose that way, then no way ”. Her name is Claudia Bolaños and she has a 5-year-old boy and a baby who sleeps in her arms.

Men choose. Among them, they vote for the Communal Council that governs in assembly. They will decide whether to put the polls on June 6, when Mexico will vote for 20,000 public offices and 15 governorships, among them that of Guerrero. Half the country has raised its hands to its head because the candidate to govern this land by the Morena party, the same as López Obrador, is accused of rape and his candidacy has been annulled due to fiscal inconsistencies. What do they know on the mountain of Félix Salgado Macedonio? Bernardino says little or nothing. That there is no television. Nothing to add about a case that has wasted rivers of ink for weeks. No candidate, also according to the guerrilla, has appeared there yet. The assembly will vote if they consent to a vote on the 6th.

The absence of the State in this area is manifest. Are they in abandonment? “One could say, Yes. Faced with a simplified discourse that attributes everything to drug trafficking, the authorities end up looking the other way, there is nothing to do, they seem to say, ”begins the Franco-Argentine sociologist Romain Le Cour. She has been in Mexico for 12 years and works for the international NGO Noria, which specialized in violence around the world. Le Cour knows a lot about the Mexican. “What happens here is much more complex. It is a social problem, of poverty and neglect. It is not enough to blame the violence on the drug traffickers and let the indigenous communities govern themselves without help, ”he explains. Simple messages end in simple solutions. And the lack of peace that exists in this mountain requires something more. Profiling in detail the thin line between the chief, the drug dealer, or his cousin the mayor, very blurred relationships. Interests more crossed than the bullets themselves.

In José Joaquín de Herrera live nine widows, 14 orphans, and 34 displaced people from nearby besieged communities. And they are isolated. The doctor approaches when there is an emergency. Nobody stops him on the road, because he also heals the afflicted in other towns. Some merchants arrive to supply the basics, after paying the one who charges. And, of course, the Coca-Cola truck. “And the Pepsi one,” laughs Bernardino. Little more. When they finish primary school, the students do not continue studying because they would have to travel a few kilometers further, where the danger lies: bullets or kidnappings, they say. Nor do they come to see the relatives who live in the head of the region. In this town, when they point to the mountain they see shotgun barrels instead of thinking of corn, beans, or squash.

On one side some goats browse, two black-and-white pigs are tied by a rope, a donkey brays beyond. The sweaty troops enter the field. “Community children, firm now! Embracing weapons, now! If there is no one to defend us, then we are going to respond with fire to the hitmen, sons of the bitch! ”. A dozen shots leave puffs of smoke in the air. And the mountain echoes them.