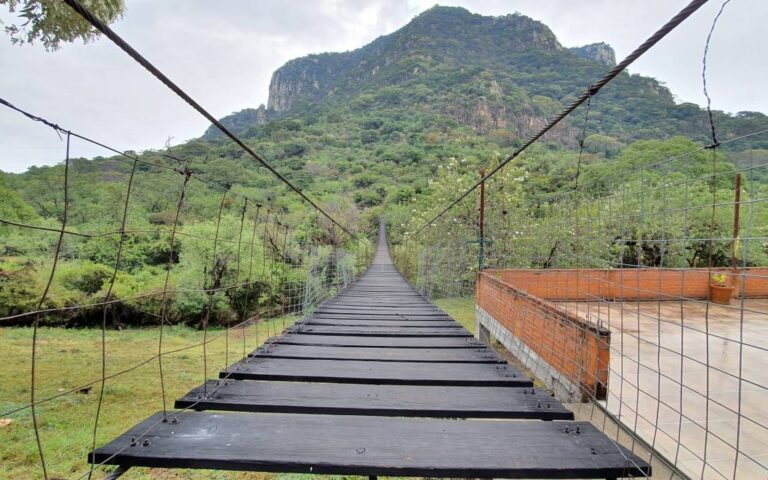 It has become the tourist attraction of the municipality, as it has various activities

Two hours from Mexico City, Jantetelco hides a place where man can have a first-degree contact with nature. Each generation of settlers has given it a different name: for the oldest, it is Cerro Gordo; the youngest call it “Cerro del Chumil”; and finally, the inhabitants of the neighboring municipalities, who can only see it from afar, baptized it with the name of the silhouette that it reflects in the distance: Cabeza de Mono.

Despite the fact that the hill is visible for several kilometers around, the truth is that until recently not many people visited it. And not because I didn’t want to. Actually, it is because not many know its attraction: in recent years, the “Cerro del Chumil” has been transformed into an ecotourism center that offers the extreme experience of a zip line that zigzags through seven points (its longest stretch is almost 700 meters), guided tours and lodging; the cabins, built with adobe, were made in such a way that guests can go out to contemplate the carpet of living nature that extends over the hill.

It’s not easy to jump off the zip line for the first time, but once you do, you can’t help but keep going. In the “Monkey Head” Cabeza de Mono this is possible because the experience is divided into seven points, each one of them with less height than the previous one, although the distance between one and the other is variable. The longest point, almost 700 meters, is the sixth from top to bottom. The staff of the ecotourism center affirms that on this journey people are moving at 50 kilometers per hour.

“This place offers extreme fun for those looking to have fun, but it is also space where people can get to relax, to rest,” says Leticia Monsalvo, who is in charge of the place.

On one side of the cabins, the place has a couple of temazcales for those who choose to relax.

Towards the end of a dirt road, Cerro del Chumil becomes something new for those who decide not to settle for looking at it from afar and entering it. As we go up to the third base of the zipline tour, one of the workers tells me that, in the winter season, there are people who come to the place in search of jumiles, a kind of edible hemipterous insect, which can still be bought in the markets today. of the Eastern region of the state.

“The jumiles fall here when they fly from the corn crops,” the young man tells me.

When you go up the hill to zip-line you are not going alone, because there must always be someone at the end of the cable to help you brake. Along the way, that company can be translated into a warm preservation of the history of Jantetelco and the legends that the hill hides, such as the one that says that in post-Independence times there were those who hid silver in this place, and there were those who looked for it.

Beyond the legends, the inhabitants of Jantetelco have known how to preserve the value of their history, particularly the episode led by priest Mariano Matamoros, an inhabitant of the place at the time of the Independence of Mexico, who joined the struggle that at that time José María Morelos y Pavón led in the south of the country.

Currently, local authorities seek to strengthen the roots that exist between the inhabitants and their land. Thanks to the courage of its predecessors, who took up arms on December 13, 1811, the independence movement was strengthened during the Siege of Cuautla in 1812, when Morelos managed to break the siege that the Spanish Félix María Calleja had imposed, giving Independence one of his first great triumphs.

The tourist center was established on ejido lands, which is why it is administered by an ejido commissariat. However, since this year it has received the support of the municipal administration to enhance its attractiveness and position it at the local and national level.