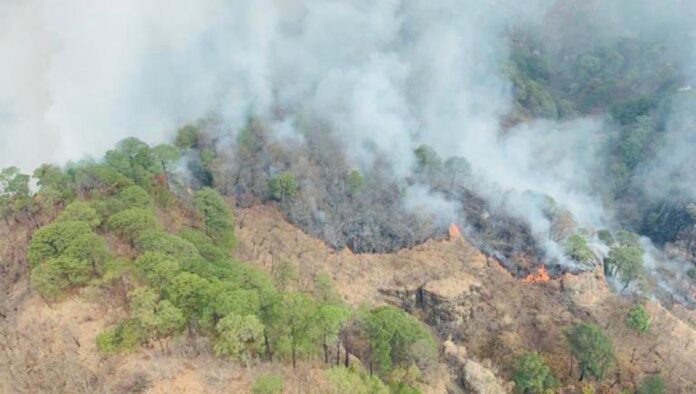 According to the Federal Forestry Commission, the fire registered in the Tepozteco hills in Tepoztlán, Morelos is of special attention, since the fire is located near dozens of houses.

On Tuesday night, winds of 30 kilometers per hour were registered in the area, which rekindled the fire, so there were still many flares between ravines and cliffs.

Given this situation, the residents of the town were concerned, so they took their most important documents and prepared to leave their homes; local authorities told them not to evacuate yet, however, the fire did not seem to stop.

The Morelos authorities activated the protocol on Sunday, April 11 at noon, when the fire started on the emblematic hill of this famous magical town.

“The protocol that Morelos activates consists of bringing brigadistas, giving the coordinates, making a reference and based on that, deciding what to do.

The helicopters arrived until Tuesday, one was in Coahuila and another in Nuevo León putting out other fires. Only two helicopters are taking care of 66 fires in the whole country, according to the Federal Forestry Commission, ”said Radio Fórmula.

To date, the fire has consumed 280 hectares of the forest area, therefore, the Morelos authority has the helicopters to use them this Thursday, April 15.

Six injured after the explosion at the “Industrias Tecnos” cartridge factory in Cuernavaca, Morelos