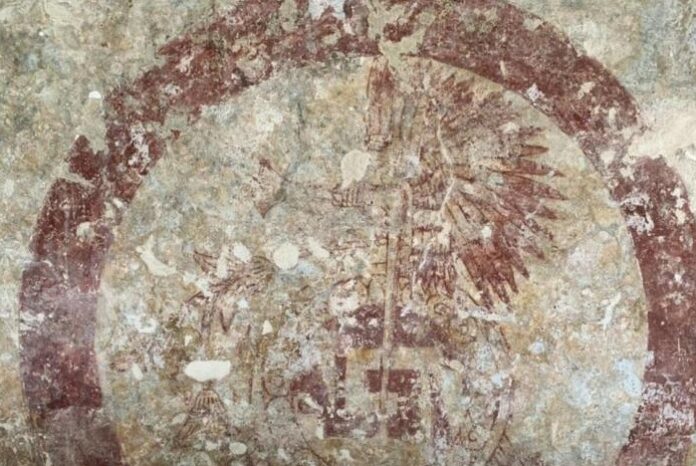 As we previously reported in the Morelos Daily Post, pre-Hispanic paintings were uncovered at a Mexican convent in the town of Tepoztlan, state of Morelos, in Central Mexico

Earthquakes shook and damaged a former Catholic convent in central Mexico, but restoration efforts have led to an unexpected discovery.

The former Convent of the Nativity in Tepoztlán was built in the 16th century as part of the first Catholic monastery built in the area, according to an Oct 3 news release from Mexico’s Ministry of Culture and National Institute of Anthropology and History. Restoration efforts began on the old convent after an earthquake in 2017.

Underneath layers of paint on the walls of three open-air chapels, archaeologists noticed part of a red circle, archaeologists said. They expected the coloring would reveal a painting of the Virgin Mary or Jesus Christ. They were wrong.

The faded red paint formed a well-preserved red circle, about 4 inches thick, experts said. Inside, the 3-foot-wide mural, found on three chapel walls, contained a plume of feathers, an ax, a wand with flowers, and a Chimalli — a pre-Hispanic shield symbol, archaeologists said.

According to local legend, Tepoztēcatl is an Aztec god of pulque, an alcoholic beverage made from agave plants, researchers from the University of Florida say. A temple dedicated to Tepoztēcatl stands atop the mountain ridge above Tepoztlán, and some local communities make an annual pilgrimage to the El Tepozteco archaeological site to worship this god, the Art Newspaper reported.

Even though connections to Tepoztēcatl run deep and long through the community around the former convent, the mural “was an incredible surprise,” one archaeologist told the Art Newspaper on Oct 13. “While we always have an eye out for anything unusual, it was not something we anticipated finding,”

The 500-year-old murals were likely painted freehand with light red paint, filled with a red glaze, and then outlined again to make it stand out, experts said. All three murals — in varying states of preservation — have been carefully cleaned and repaired, officials said.

The unexpected discovery leaves archaeologists with more questions than answers. What is the significance of the murals? Why were they placed in a significant spot for Christian worship? What does this reveal about the indigenous religious tradition in the area? Experts aren’t sure, at least, not yet.

Tepoztlán is about 50 miles south of Mexico City, in the state of Morelos.