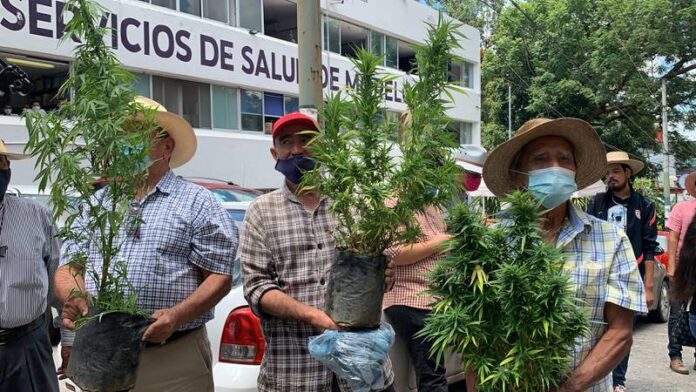 The municipality in Morelos that wants to be the first cannabis town, the Mexican golfer who won an international final, a story about the Wixárika culture, and other notes.

Tetecala seeks to be the ‘first cannabis town in Mexico’

With marijuana plants and smoking joints, cannabis producers from the municipality of Tetecala, Morelos, and activists in favor of legalization, went to the offices of the State Secretary of Health, so that through the Coprisem, their crops can be endorsed. and make this town “the first cannabis town in the country. “

“We submitted the application for a license to grow marijuana legally. What we seek is to change the course of our people, to attract commerce that seeks to transform cannabis, but also to attract tourism. We want to be the first cannabis town in all of Mexico, which would benefit more than 20 thousand inhabitants ”, announced Alejandro Vela, spokesman for the United Peoples of the South Civil Association of the State of Morelos.

The foregoing, he said, to meet the demand that exists for both recreational and medicinal use and even take advantage of the hemp of the same for the production of fabrics and clothes and, with this, help the economy of this municipality that has been affected by the corruption.

The producers who had a letter addressed to the Secretary of State Health, Marco Antonio Cantú Cuevas, and the head of the Commission for the Protection of Sanitary Risks ( Coprisem ), carried slogans in favor of legality and affirmed that on this occasion they were going for the “yes or yes”.

They detailed that together with the fact that it will boost the income of more than 20 thousand inhabitants, the spill will also reach the residents of Coatlán del Río, Mazatepec, and Miacatlán.

Alejandro Bello pointed out that currently the ton of sugarcane is paid in 1,300 pesos at the harvest season, but it is no longer so profitable, so they want the producers to also plant marijuana.

Currently, there are four licenses: the planting license, the transformation license, the sale license and the export license.

He added that with the answer in favor, then people will be able to buy derivative products in Tetecala such as: tlaxcales, panqué, alcohol with marijuana, cakes, among others.