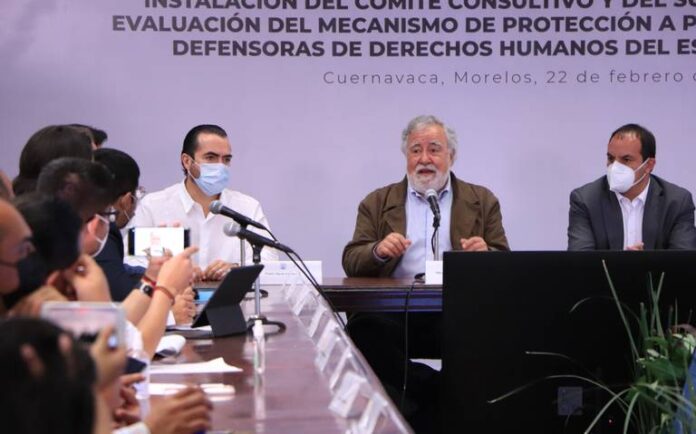 The installation of the provisional committee for the Mechanism for the Protection of Journalists and Human Rights Defenders was attended by Alejandro Encinas, Undersecretary of Human Rights,

Encinas insisted that the AMLO government has not turned a deaf ear to the claims for the increase in the murder of journalists in Mexico.

The provisional committee made up of Pedro Tonantzin, María Esther Martínez, Jaime Luis Brito, among others, protested in front of reporters, as well as media workers in general.

María Esther Martínez spoke on behalf of the group, she recalled that the installation of the mechanism in Morelos is a struggle of many years, despite the fact that Morelos is the first federal entity to have a Law for the Protection of Human Rights Defenders and Journalists.

The Journalists of Morelos demand that the deaths of Heber López, Alfonso Margarito Martínez Esquivel, José Luis Gamboa Arenas, Roberto Toledo and Lourdes Maldonado, murdered in January and February of this year, not go unpunished; but also for the 47 murders that were registered in the government of former President Enrique Peña Nieto and the other 25 murders against journalists so far in the six-year term of Andrés Manuel López Obrador.

Martinez pointed out that journalists do not ask for special treatment, simply that security and integrity be guaranteed to carry out the work that embodies social work, which has to do with the exercise of freedom of expression, with the socialization of public information, with transparency and the obligatory accountability of the authorities, in favor of the citizens and that it is essential in any democracy that presumes to be so.