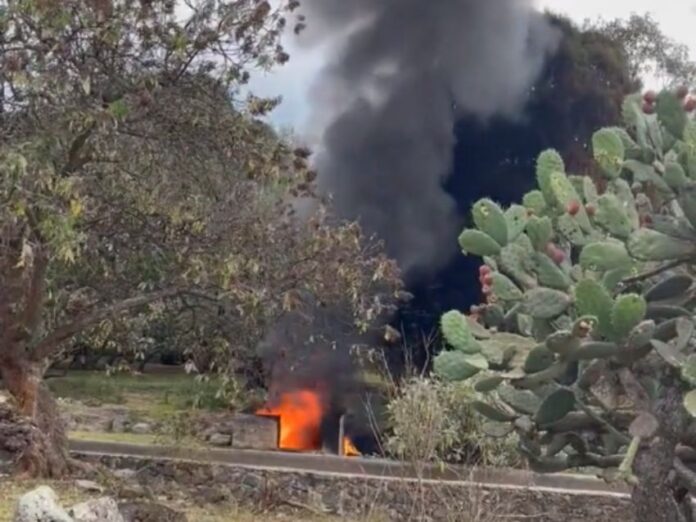 People in a village just north of Mexico City complained of a persistent odor of gasoline for weeks, but even they were surprised when the community’s spring-water well burst into flames and began belching dense black smoke.

Residents blocked a major highway this week in protest, complaining that the smell and smoke is unbearable and that they have lost their water supply.

Water catching fire may sound strange, but in Mexico gasoline leaks have been blamed for several tragedies in the past. The fire broke out late last week in the hamlet of Mexicaltongo, in the township of Jilotepec, not far from a major refinery.

The state-owned oil company Petroleos Mexicanos refused to comment on the situation, but people speculated that one of the company’s pipelines was leaking gasoline into local aquifers or that an illegal tap drilled by fuel thieves could have caused the leak.

Jilotepec Mayor Rodolfo Noguez said late Monday that officials of the oil company, known as Pemex, had agreed to visit the water spring to investigate the huge fire.

“We still do not know what caused this pollution and the fire that it caused,” Noguez said. “There are a lot of hypotheses, the possibilities.”

He said water would be trucked to affected families.

Mexico, and its system of antiquated and theft-prone fuel pipelines, is no stranger to such disasters.

In 1993, a series of sewer explosions hit a 50-block area in Guadalajara, killing at least 220 people. Investigators later determined the blast was caused by gasoline that leaked from an underground pipeline into the sewer system.

In 1984, a series of explosions in underground gas pipelines rocked the town of San Juan Ixhuatepec, on the northern edge of Mexico City. The blasts devastated a third of the town, killing 452 people and injuring more than 4,200.